I’m getting a bit tired of all the focus on #20, which is usually the hardest math question on the test. I guess I’m a bit complicit in all the hype, since I like to illustrate techniques on here using difficult problems, but that’s only because I like to show how powerful those techniques can be. Seriously, let’s be very clear about this: #20 is the LEAST important question on the test. You shouldn’t be worrying about it at all unless you’re getting 780’s or higher every time.  Here’s an argument based on a simple economic principle. 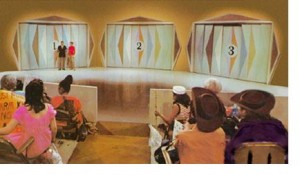 If you’ve taken or are taking an economics course, you’re surely familiar with the concept of opportunity cost. Put succinctly, opportunity cost is the cost of a certain decision in terms of the best available alternative. For example, if you choose to go to the movies (which costs you $10), but if there weren’t any good movies you you would have spent those two hours babysitting for $15/hour, then your opportunity cost for going to the movies is what you paid plus what you COULD HAVE made instead ($40). That’s an expensive movie, right?

So here’s the argument:

You should, therefore, be as positive as possible that you are correct in your response to every question you work on before moving on to the next question (which will have a higher opportunity cost for the same amount of raw score points). You should not even attempt #20 until you are sure you are correct on #19, which you shouldn’t even attempt until you’re sure you’re correct on #18, etc.

I’ve said it before but it bears repeating here: You’ll increase your score more by getting fewer easy questions wrong than you will by getting more hard ones right.

* In the section that has the grid-in questions, questions go from easiest to hardest twice, once in the multiple choice (#’s 1-8) and then again in the grid-ins (#’s 9-18).

Thank you for laying that case out so clearly. It’s something that really can’t be said enough and that I have spent a lot of time trying to drill into people’s heads, unfortunately with varying degrees of success.

Thanks. I’d like to make it even more clear. Maybe I’ll revisit this sometime soon. As you said, it really can’t be stated strongly enough.