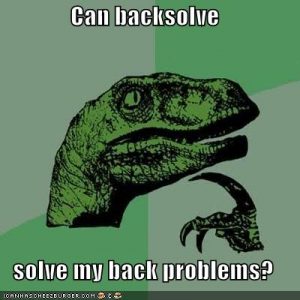 It’s important to be ever-cognizant of the fact that on a multiple choice test, one of the 5 answers has to be right. Because of this, it’s sometimes possible to answer a question correctly by starting at the end, and ending at the start. Most in the prep world call this “backsolving,” and it’s even more powerful on the SAT because the SAT will always put numerical answer choices in order, making it even easier for us to do this efficiently. Pattern recognition, folks: it’s super important.

Anyway, let’s have a look at a backsolve example. The setup for this question comes from a contest winner; I apologize in advance if it’s too macabre (or just plain weird) for you.

Instead of trying to write an equation to solve this, let’s use the fact that one of the 5 answers has to be right to our advantage. If we start with answer (C), we’ll have to try 3 answers in the worst case scenario, since (C) is in the middle and if it’s not right we’ll know right away whether we need to go higher or lower.

I’m going to set up a table to keep track of what’s going on, but when you do this on your test you certainly don’t need to set up a table. You just need to pick an answer choice to start with — almost always (C) — and follow the instructions in the question to see whether everything is internally consistent.

As the table above shows, if (C) is true and 68 kids were on the island before the carnage, then 17 kids were eaten Monday, leaving 51. Then 13 kids were eaten Tuesday, leaving 38. Half of the kids who were eaten Monday were eaten Wednesday, which means on Wednesday Rex only ate 8.5 kids. We know (C) isn’t right if it’s leaving us with a fraction, but more importantly, we know that the number of kids left according to (C), 29.5, is too big. Remember, we’re looking for 22 kids left on the island, so our answer must be smaller than 68. Let’s try 64 instead:

As you can see, 64 doesn’t work either, but we’re getting closer. At this point, we’re pretty confident (A) is our answer, but it also shouldn’t take us very much longer to confirm it:

So how do you know when to try backsolving? In general:

Practice, of course, will make this easier and easier. As with any new technique, you’ll want to make sure it’s second nature for you, even on hard questions, before you sit down for the real test. So practice backsolving on hard questions now, and reap the benefits on test day. It’s rare to find a test that doesn’t have at least a few good backsolves on it.

For more tough backsolve problems, try this and also the last question here. For even more, browse the “backsolve” tag on my Tumblr for some recently posted examples!

I think I found a “sort of” trick. What I figured out is that you can obtain the correct answer by adding 45 and 30 and getting 75. Then, subtracting “those who do only one task,” which is 38 and dividing that by 2, you can get 19—the correct answer.

I am not sure how or why it works, but it just does. Note, however, that this only works when you need to find “those who do only one task” or “those who do both tasks”—this will never give you the answer for a total amount.

Clever! This works because when you do 45 + 30, you’re double-counting the people who do both tasks.

Ohhhh! I love you!

Of course, there’s overlap where a bunch of kids are wearing both, but that’s not really important for our purposes. 🙂

oh WOW! It’s that easy! I was really confused by the overlap of kids wearing both. Thank you!

I don’t see how you arrived at the answer A for 13. An explanation would be really appreciated!

This question is in my book, too. Here’s an image of the notes that accompany it there.

Please help me with #19 on the first math drill! I always skip these kinds of questions on the SAT and now i want to conquer it! Please help & thank you, you’re the best 🙂

This is a fun backsolve. Here’s how I set it up in my book.

Check the comments in the drill post first…you’ll get faster answers! 🙂

See this comment on the Drill 2 page…does that help?

For number 13, could you show me how you would solve it algebraically, just in case it comes up in the student produced questions.

You’d have to set up a system of equations. Say x = number of hats and y = number of scarves.

Wow!! thank you very much :DD

I also did question 16 in a similar but slightly different way that I found very easy. Take the trip to Waconia to be x and the trip to Chaska to be x+4

Hey, could you please explain how you solved #13 on Math Drill #3? I can’t seem to get the correct answer even though I understand #19, above. Thank you in advance.

if using this method, and all conditions are met, you only need to backsolve 2 of the answer choices. If you start at C and determine is has to be smaller, you can then solve for A. If that’s wrong, then B must be the right answer. Of course, I recommend you still check B for correctness if you have the time, but in a dire situation, it’s nice to know you only have to backsolve 2.

#3 (A venn diagram would be nice for a better explenation

Personal side note: If you can quickly come up with the mathematical relationships (the complicated part), it might be easier just to solve the problem algebraically. If not, backsolving is a great way to go about it.

Hey, for number 16, wouldn’t it be easier to, rather than backsolving, do this:

It just seemed like a better way to solve it. So, on the test, should I try this sort of method first or go with your backsolving method, which is probably safer in the grand scheme?

That’s very good. If you can write the equations and are certain of them, then they’re a totally legit way to solve a problem. To be sure, that’s exactly how your math teacher in school would tell you to solve this one!

Think of backsolving as an escape hatch for when the equation (or system of equations) isn’t obvious, or as a way to check your work if you’re unsure of your algebra. Just make sure you practice it enough that you’re comfortable with the technique, so that if you need it on test day, you can actually use it! 🙂