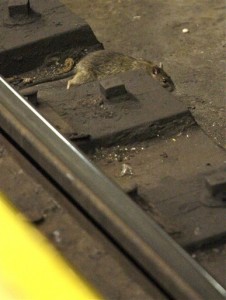 I’m going to tell you a secret: I don’t sleep well at all the night before SAT scores are released. It’s not like I even took it. I just get so excited for all the kids I’ve worked with that I can’t sleep. So last night, after a sleepless night followed by a bunch of good news, I slept like a rock. And I woke up energized, and I got some much-needed work done on my book, and now I’m posing this weekend challenge in timely manner. I’m feeling very productive today. Yay me!

By now you know the drill I’m sure. First correct (and non-anonymous) comment gets access to the Math Guide Beta (to which I just added some more hard questions this very morning).

Adina keeps track of the number of rats she sees while she waits for the subway every morning. She noticed that there was a roughly 46% increase in the amount of rats she spotted between Tuesday and Wednesday. If she saw 19 rats on Wednesday, what will be the percent decrease in rat sightings if she sees the same number Thursday that she did Tuesday? Round your answer to the nearest percent.

Good luck, y’all. And have a great weekend! I’ll post the solution early next week.

UPDATE: Nice work, Jessica. Enjoy the Beta. Solution is below the cut.

To solve this, you really just need to remember the basic formula for percent change:

What you’re given in this problem is the percent change (roughly 46%) and the final value (19). You can use that to find the original value (since it’s the number of rats Adina saw Tuesday, let’s call it t.

A rat is a rat, there’s no partial rats, so we say Adina saw 13 rats on Tuesday, and thus will see 13 rats on Thursday. From here, it’s just plug-and-chug to find the answer. She’ll see 6 fewer rats on Thursday than she did on Wednesday, so the change is 6 rats. The original value is 19, because now we’re starting from Wednesday.

Round, like the question said to, and you end up with 32%.

I liked this problem ;), tricky percent change problem….I guess in the  SAT, most people would choose 46% as the answer because they would think it should stay the same because the difference in values are the same….Thanks for this problem!

Is there a way to solve this through plugging in?

No, you can’t plug in here because you’re tethered to the number 19, so making up random numbers will lead you astray.

That’s not to say, though, that you couldn’t solve it with trial and error by guessing numbers for Tuesday’s rat count until you found one that gave you the right percent increase. Not the fastest way to do it, but certainly an option if you’re temporarily stumped.

Hi, I know this random,
Did you read a lot of serious literature or books in general in high school? Just curious on how you tackled Critical Reading. Thanks

I did read a lot of books, but I don’t know if I’d say it was all serious literature. Some of it was, and some of it wasn’t. I read everything I could get my hands on by JD Salinger (all of which I found more challenging than The Catcher in the Rye, which was my introduction to him). I read everything that was assigned to me for school (and I was lucky enough to have been assigned some really great books like To Kill a Mockingbird, The Great Gatsby, and A Separate Peace, all of which I hold dear to my heart). And Winesburg, Ohio. Good God is that a good book. I was assigned one story from that and looked for the rest on my own. The Grapes of Wrath, which I chose for summer reading, blew me away.

I also read about 10 books by Alistair MacLean, who wrote war adventure books. I was really into those for a few years. They were decidedly not sophisticated literature, but they were good stories told well.

So yeah, I read a lot. It helped me develop as a writer, and it bolstered my vocabulary a good deal.

A lot of “classic literature” is tough to slog through. I had a hard time with Jane Eyre. But for me, the books I listed above were not only classics, but absolute page turners. If you find an author who writes in a way that resonates with you, read everything else you can by him or her. Reading a lot doesn’t have to mean torturing yourself. 🙂

Those are some of my favorite books…though I didn’t love Grapes of Wrath….but I should try that now.

But the others….love.  In fact, my daughter “Daisy” was inspired by one.

The awesome thing about Google Docs is that as soon as I update the book, you do have the most current version. This update I added an explanation (and I think a question) to the Exponents chapter, a question to the Absolute Values chapter, and I added a couple questions to drill 4, which as you know is still a work in progress.

I would like to answer future weekend challenges, but I wouldn’t want to prevent others from getting the math guide….can I still post answers on here?

Absolutely! Either wait until you see someone get it right (if you want to be super polite) or shoot me an email and I’ll let you know privately whether you got it. 🙂

you rounded too early…

… or too late (I should have rounded 19/1.49 to make sure I had a whole number of rats). Hopefully using fractional rats isn’t too big an error though

You can’t have fractional rats. That’s why the question says “roughly 46% increase.” Think how unhappy a fractional rat would be. 🙁

haha… yes. Anyway, if I hadn’t misread 46% as 49%, I would have come upon the right answer. Should have been more careful.

That’s so nice that you have insomnia about your students’ scores.  Just one more way to show you care.

And I’m so jealous that you’ve been productive.  I’ve been sidetracked — which feels like the story of my life,  by unavoidable” life hassles” that feel like root canal to me, but worse.  Ugh.

And next of all, I want to let you know that I HATE RATS!  hate hate hate.  So I’m boycotting this problem on grounds that it will give me nightmares.
One of the main reasons I moved out of NYC (where I’m dying to move back to now) was “fear of rats.”  And then I got to the suburbs and was living in an old converted stable….and guess what?  I had rats.  I always joked that they hung onto the moving trucks and followed me out here.  For months I thought theyre were squirrels living in my ceiling (which I was “ok” with, by the way, which makes me think that rats are just poorly branded, and maybe they need a new name…..and the bushy tail doesn’t hurt either).  But nope; turns out my “squirrels” were rats!  I had to move out of that house when I found out.  Literally, packed my bags that night and moved to a hotel until I found another house.  (rat free)Someday I’ll tell you my horrible rat stories.   You won’t believe…… The more I feared them the more weird s**t happened.Now I don’t fear them.  I just hate them.  But I actually haven’t seen a rat in years (since I stopped the fear).