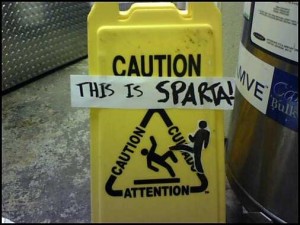 Since you’ve been paying such close attention, you know by now that the difficulty of math questions increases as a section progresses*. On a 20 question section, you can count on #1 to be super easy, #5 to be bit tougher, #10 to require more than a modicum of thought, and #20 to be a royal pain. Duh, right? You know this. If you’ve ever taken an SAT or PSAT, it’s almost impossible not to have noticed this. But have you thought about what it means for you, the intrepid test taker?

This simple fact has 2 important implications:

When you’re faced with a question that’s supposed to be more difficult, you should resist the urge to jump on an answer choice that seems immediately obvious. It’s probably best to illustrate this with an example.

This question isn’t too tough and you might not need my help to solve it, but before we get I want to ask you something.

What choice should you not even consider? Well, if this question was just asking you to start with 100%, and subtract 30% and 20% and end up at 50%, it wouldn’t be a #15. It would be a #5. So there’s no flippin’ way it’s (D). Since we know we’re later in the test, there must be something else going on here. And sure enough, we see that Stephen gives 20% of what he has left after he’s already donated 30% to charity.

If you’ve ever been told to watch out for “Joe Bloggs” answers, that’s what I’m talking about here. I want to be clear: “Joe Bloggs” is not a technique for answering a question correctly, and anyone who tells you otherwise hasn’t spent enough time learning about the SAT. But it is helpful to remember that, once you’re about halfway through a math section, the questions are supposed to require some thought, so you shouldn’t fall for answers that require no thought at all.

To get it right, as we’ll often do with percent questions, we’re going to plug in.

* On a grid-in section, difficulty increases twice — once from 1-8 (the multiple choice bits) and again from 9-18 (the grid-in bits). Also, in the rare event where you get a few questions that refer to the same graph or set of equations, the first one will be very easy and the last will be very hard (like a mini-section inside a section).