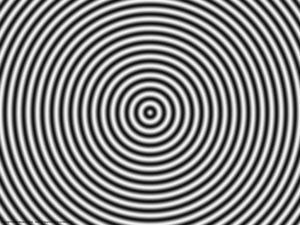 I’m going to be out of town for a few days, so I won’t be able to post a solution for this until probably Monday, but hopefully I’ll be able to check in and at least congratulate the winner, who will receive a free copy of my Math Guide.

A student is drawing concentric circles, each with a diameter one centimeter longer than that of the one before. When he tires of this random task, he has drawn 21 circles. If the area enclosed by his circles increased by 300% from the time he drew his first circle until the time he was done, what is the radius of the smallest circle?

The next tricky part is the 300% increase. An increase of 300% does not mean that the new area is 3 times bigger than the old. It means the area increased by its original size 3 times over. 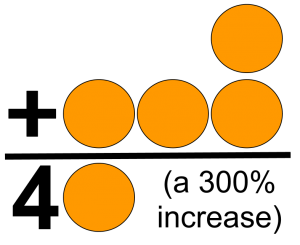 This is an important insight, and it makes this problem a lot easier. I’ll include the mathy way below, because I like that kind of thing and I think it’s important to show that there are multiple ways to solve this, but note that it’s a bit more involved if you don’t know that a 300% increase means you end up with 4 times what you started with.

If the new area is 4 times the original area, we can set up a simple equation:

You know your first terms have to be 3r and r, and you know one factor must contain subtraction to get -100 in the last term, etc. A little trial and error later, you get…

That was a bit mathy, right? Here’s the other, slightly mathier way:

If the area enclosed increased by 300%, then we can use our percent change formula to solve.

And simplify a little more…

The smallest radius is 10.

The smallest radius is 10 centimeters.*

Something tells me that with no response that I’m wrong. Looks like it is back to the drawing board.

Sorry, I have been so swamped that I haven’t posted the solution yet. David got it right first…the answer is 10cm.