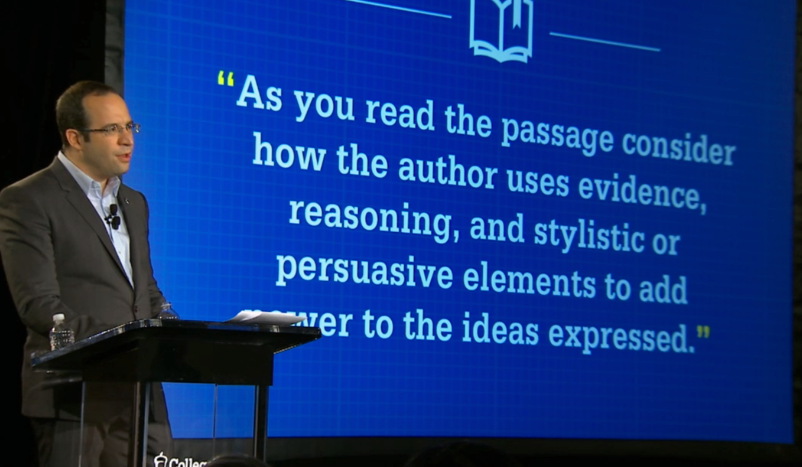 If you’re preparing for the SAT right now, then you probably don’t need to worry about this—the test won’t change until March 2016. Even if you’re a sophomore right now, if you’re already thinking about the SAT then your focus should be on the current test, not the new one.
Well, that was certainly interesting! I believe you can still watch the announcement by College Board President David Coleman if you want here, but you’ll get the information much faster by reading one of the thousands of articles about the new SAT that are already online from tons of major news outlets. You can also get it straight from the horse’s mouth here and here. A lot more information will be released on April 16th.
I’m not going to write a super long response to the announcement right now, but here are a few of the most salient changes and my reactions to them.

So, yeah. The new SAT will be quite different from the current one. Here’s how I think it’ll still be the same:
So those are my initial reactions. Did you watch the announcement? What did you think?

Are you going to restructure part of this website Mike? I’m a freshman, and this is a serious change for me…

Yes, as more information is released about the new test, I will be publishing new strategies and content reviews.

I have listened to this guy a few times now and I just don’t understand the “why” very well. I can see changing the Essay and separating its score as is done on the ACT, but that’s just common sense (it should never have been included in the 200-800 Writing score in the first place). What I can’t see is what is accomplished by drastically changing the other components, especially vocabulary and math. Coleman makes an extremely weak case for persuading me that these parts of the test are broken. I find his explanation in regard to vocabulary particularly nonsensical.

However, I do have a crazy theory 🙂

I think an unstated goal of the change is to reshape the score distribution in a way that flattens the peak of the bell curve and leaves the right tail fatter than the left tail (more so than it already is). The way to accomplish this is to make the test easier, which is what I predict they will do (not easy, but easier). To avoid drastic moves in average scores (not to mention 10,000+ kids getting perfect scores), I believe the difficulty will not come down evenly across the board. Easy and medium difficulty-level questions will see most of the changes (the questions high scorers are already getting all correct). The underlying goal is not to change the overall numbers drastically, but to shrink the differences between different groups of test takers. This is also why they are moving back to a 1600 scale, differences will just *seem* smaller. The College Board has been on the receiving end of so much criticism for so long that I think they are finally cracking.

A side effect to all this will be, and this is my long dated prediction, a big increase in the number of schools requiring SAT Subject Tests. The SAT’s skinny right tail is used by a great many selective colleges to differentiate between students. The more students that make it into that tail, the less effective a differentiation tool the SAT will become for these schools.

I could be wrong of course, time will tell. The test questions themselves could be made easier while introducing more time pressure. Such a test would be even more in line with the ACT. Not sure what the point of that would be, as we already have an ACT.

An interesting theory, JD. I’m not convinced that there’s really any intention to alter the shape of the bell curve, but you raise an interesting point in that increased demand for Subject Tests would surely be a welcome development for the College Board.