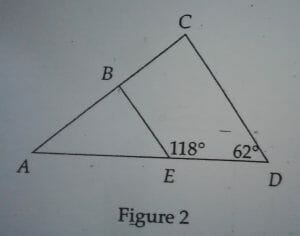 Those are similar triangles: angle BEA is also 62º, angle A is the same in both triangles, so angles ABE and ACD are also the same.

If the area of the small triangle is

, then the area of the big triangle will be

is four times bigger than