Both observers are observing the same ratio signal, so the value of P will be the same for both. Because it won’t change, we can plug in for that, too. Let’s say P = 100. (You can really pick anything for this, but 100 is a good choice because you’ll end up taking its square root.)

Now solve both equations for r. I’m going to use

to keep track of which distance is which. 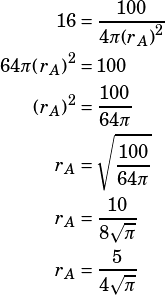 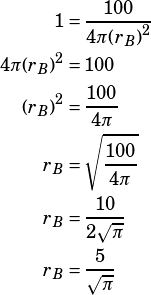 The question asks for the ratio

. We can calculate that!

That frankenfraction is not as gnarly as it looks. Just remember that dividing by a fraction is the same as multiplying by its reciprocal, and simplify:

Because P could be anything, I plugged in 4π for P, which made my math a lot easier (no gnarly frankenfraction)… I don’t always notice ‘nice’ numbers to plug in, but it really helped in this case!

Is there a way, logically, to do this problem by seeing that if A’s I value (intensity) is 16 times that of B, that A’s r value (distance) has to be the inverse square root since (looking at the equation) the r value is in the denominator & is squared? In the past on these problems, I always think afterwards, “Oh, yah, that makes sense.” I just would like to be able to do that from the beginning without getting a brain cramp.

Also, alternatively, could using the answer to #22 help in solving this question since it involves solving for r^2?