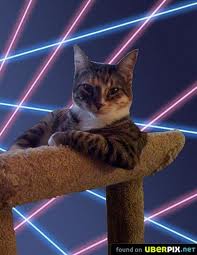 Let’s talk a bit about lines. Like everything else on the SAT, questions about lines will require some very basic knowledge of a few math rules, but you don’t need to know everything you ever learned about Cartesian coordinate planes. It’s important to be able to differentiate what’s important from what’s not.

We’ll get into mathy math in a minute, but first take a moment to try to remember the first time a math teacher introduced the concept of slope to you. You’ll often need math, but I encourage you to think about whether a line question can be solved simply by counting over and up from point to point using “rise over run” before you get too involved in equations. You might save yourself a lot of time and aggravation that way.

Keep it simple if you can.

Don’t even think of writing an equation here! Just apply the first thing you ever learned about slope: that it’s the rise (up and down) over the run (left and right). You can easily list other points on the line simply by adding 1 to the y-value for every 3 you add to the x-value. This is easier to show than it is to say. Click this drawing to blow it up if it’s too small: 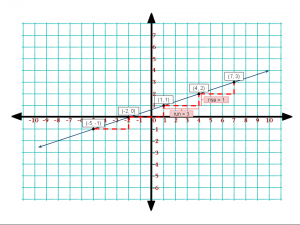 That’s it! (C) is your answer; all of the other points clearly fall on the graph!

OK, on to the mathy math.

SLOPE-INTERCEPT FORM OF A LINE
y = mx + b
(m is your slope, b is your y-intercept)

Some times you won’t be given a line equation at all, just two points. In that case, you can calculate the slope using this formula:

Know the slope formula and the slope-intercept form of a line, and you’re well on your way.

Other facts to know cold.

One other reminder that deserves its own heading.

When you are told that a particular point is on a line, that’s the same as being told that the equation of the line works out when that point is plugged into the equation for x and y. In other words, (4,6) is on the line y = x + 2 because 6 = 4 + 2. When a question gives you a point and an equation, PUT THE POINT INTO THE EQUATION.

Let’s wrassle with a tough example.

I’ve seen variants of the following question appear on multiple tests. Let’s see if, given what we know about lines, we can figure it out:

With only a cursory glance, it seems like we don’t have much to work with here. Look closer. Note that the question states that line m passes through the origin. This is very important. It’s common for the SAT writers to tell you that, and it’s also common for students to completely breeze by it. When a line passes through the origin, that means we have the y-intercept (zero). It also, more generally, means we have a POINT, which isn’t super-important here, but will be on lots of questions.

Since we know the y-intercept of line m, and we can easily calculate the slope (line m is perpendicular to line n, so the slope’s gotta be the negative reciprocal of n‘s slope of -1/2, remember?):

we can write the equation of the line:

Now wrassle by your lonesome.

When you have reflections across EITHER the x-axis or the y-axis, the slope is negated. So if the original slope was -4/5, the slope of its reflection will be 4/5.

For 16, put the line in slope-intercept form to see that it has a slope of 2/3. The slope of a line parallel to that one must also have a slope of 2/3. Put each set of points into the slope formula until one does.

Can you please show me how you do #10

This question is just testing whether you know that perpendicular lines have negative reciprocal slopes.

Hi, awesome creater of this website! Despite knowing all of that, I still can’t figure out why (A) 3y + x = 26 is the right answer. Because the slope of this line is -1 and we’re looking for -1/3. I’m assuming I’m missing something. Could you tell me what it is?

Yep! You don’t know the slope of the line until you put it into slope-intercept form!

can you please explain 16?

Parallel lines have equal slopes, so first you need to figure out the slope of the original line by putting it into y = mx + b form. When you do that, you’ll see that you’re looking for a slope of 2/3.

From there, just put each pair of points into the slope formula until you get a slope of 2/3.

Well, first, it looks like you flipped the slope when you converted–the original line should have a slope of 2/3, not 3/2. After that, you just need to find the slope between the points in each answer choice until you get 2/3.

Ah, you shouldn’t be substituting here–you should just be using the slope formula (see it in the post above) to find the slope of each set of points in the answer choices.