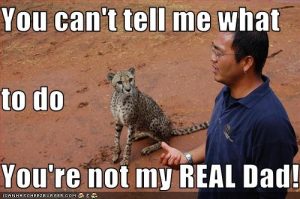 Pretty easy question here, so I’ll attach a prize of fairly small value, but that might still be fun: the first person to comment with the answer gets to name a character in a future word problem on this site, and what they do/sell/wear/eat. For example: “Rita is the diaper changer at a daycare center that feeds the kids nothing but corn.” Of course, I have no way of contacting an anonymous commenter, so you’re going to have to identify yourself. Cool? Let’s goooo.

Four kids are in a room; their average age is 8 years old. Then an adult enters the room, and the average age becomes 16. A tense conversation quickly escalates, culminating in one of the children screaming “You’re not even my real dad!” and leaving the room, but the average age in the room stays the same. A few minutes later, another kid leaves the room in search of a sandwich. If the last kid to leave was 4 years old, then the adult is how much older than the average age of the people remaining in the room, awkwardly staring at each other?

MOAR UPDATEZ and SOLUTION: Congratulations to “Amy” who answered correctly, albeit with some degree of uncertainty. Good enough, kid. Email me to claim your prize.

Solution after the jump.

We’re going to solve this bad boy with the average table. Because it is awesome and if you don’t love it then you probably are incapable of love. Let’s start by finding the age of the adult. Here’s what the problem tells us:

In order to find the adult’s age, just fill in the sums of the ages in the first and third rows, and figure out the difference. That is to say: if we know the sum of the ages when it was just the 4 kids in the room was 32, and then the sum of ages became 80 when the adult walked in, how old must the adult have been?

OK, so if the adult is 48 years old, we have half of what we need. Now let’s figure out what happened after the adult walked in. We know two people left the room, and we know enough about each to figure out the average age in the room when the dust eventually settles. Picking up from where we left off, let’s deal with the first kid having a little hissy fit and leaving:

This looks a lot like the table above did, so we’ll fill it in the same way. Note that I filled in the age of the kid who left, although it doesn’t actually matter at all to the solution of the problem.

The adult is how much older than the average age in the room?

@Amy: very good! Email me (mike-at-pwnthesat-dot-com) to discuss your prize!

Full explanation will be added to this post later today.

Rex is a dinosaur who eats kids who eat nothing but corn.