Since you guys tore up my last challenge question so quickly, I figured I’d make this one a tiny bit harder. Let’s see if I can’t stump you for more than 8 minutes. 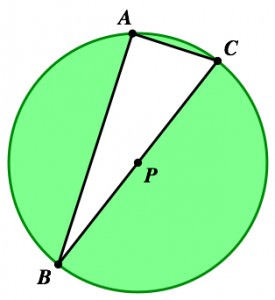 , and AC = x – y, what is the area of the circle in terms of x and y? (Be careful typing your answer—parentheses matter!)

UPDATE: Tuấn got it first, although a others came VERY close (careful with parentheses!!!). Solution below the cut.

It might not be immediately clear what to do here, but as is true of most geometry questions, it’s a good idea to start by listing everything you know. First, you know that triangle ABC is a right triangle, because BC is a diameter, and point A is on the circle. You might recall from geometry class that if an angle lies on a circle, its measure is half of the measure of the arc it corresponds to. Since A is on the circle and corresponds to a 180º arc, the measure of angle A is 90º. You probably won’t see that rule tested on the SAT, but it’s not outside the realm of possibility. So here’s what we know: 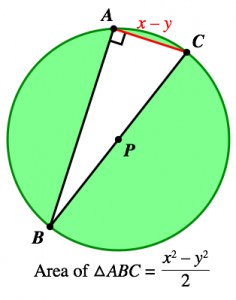 Of course, we also know that the formula for the area of a triangle is ½bh. So let’s figure out AB:

Oh look. Difference of two squares. Crazy how often that appears!
Now we can solve for BC, using the Pythagorean Theorem:

Nice. Here’s what we’ve got now: 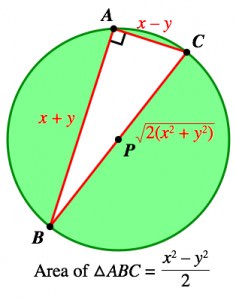 Of course, BC is the diameter of the circle, and to find the circle’s area we want the radius, which is half of BC:

Now, about that area:

Check your parentheses! Your π is only on half of your numerator.

oh mike. unbelievable. i thought i missed this week chalenge, given many comments coming earlier. how can i receive the book? love your book, also :))

Send me an email (mike@pwnthesat.com) with your shipping address. We’ll sort it out from there.

If you didn’t ask for the area in those terms then we’d probably be more stumped and end up solving for a variable, plus, the SAT doesn’t normally word the problem like that?

Your rewording makes everything clear and plain as the day, satisfies people’ general (yet weak) assumption: AC is smaller than AB then AC is x-y because x-y smaller than x+y at the very first glance).

The first version did state the result must be in terms of x and y, implying the only way to solve is presenting BC (or BP or PC) in terms of x and y. Hard problems tend to be somewhat vague for formula-applying people, because it hides the badly needed details. It would be so much easy to be a week challenge, let alone the harder one you say in the introduction if you try to reword like that (Yep, I am saying that the question should be hard for the challenge, not that it should be hard like the hard one on the SAT. We are in Week Challenge and Mike did say that the range of these challenge problems are not SAT type)

I would love the original question, then! It’s concise, and sufficient, vague enough yet tight and allows no more than one direct solution/reasoning given the time less than 3 minutes! Just ONE ABSOLUTE way to solve!

It’s sufficient here because we see the constant 1/2, the can-be-factored-out-and-SAT-favorite-little-dirty-trick x^2-y^2 in the given area of triangle. What more would we expect from that when it fits perfectly with the general formula S=b.h/2 ?

Restricting to AC is x-y is unnecessary. When we solve, we would notice the symmetrical pattern and square power. That means AC and AB can be assigned x-y and x+y interchangeably without affecting the result

Let x greater than 0 and y smaller than 0, we would have AC is x+y < AB is x-y, fitting with the diagram given

Last words: Mike, your first version is perfectly OK. If stated clearly like now, it would be no longer interesting 😀

Thanks. BUT, what if AC was 1? Then AB could be x^2-y^2, and you’d have a different triangle (with the same area) and a different hypotenuse.

That’s why I needed to constrain AC. 🙂

I get your point. The possibility happens. The correction prevents it.
However, I stubbornly like your original version. it is now not hard any more, aigooo