I don’t know if you followed the kerfuffle between Jonathan Coulton and Glee a few weeks back. It’s old news now, but I watched it unfold at the time with great interest, and I’ve been thinking about it again the last few days. The incredibly short version: Jonathan Coulton is a fairly popular musician (on the Internet, anyway) who recorded a cover of Sir Mix-a-Lot’s “Baby Got Back” in 2005 (above). Glee did a note-for-note recreation of his cover without crediting him. Then Fox’s lawyers told him he should be thankful for the exposure he didn’t get because nobody credited him.

This is a case of morality and legality not completely overlapping, and that’s all very interesting if you’re into intellectual property law (which I know is very popular among high school students these days) but that’s not where I want to go with this. The reason I bring it up is that Mr. Coulton ended up announcing that rather than pursue recourse through the courts, he’d completely change direction and try to turn this into something positive for him, and for some great charities. And there’s an SAT lesson there: know when you’re beat, and do something about it.

Coulton’s indignation was justified, but he recognized early on that he’s not going to beat an army of Fox’s lawyers, so he shifted tactics. If what you’re doing isn’t working, try something else. This is what I’m talking about when I implore you to be nimble. It’s pretty good advice for life in general, and it’s particularly germane to the SAT, on which many of the most difficult questions are vulnerable to techniques that will allow you to sidestep the math solution, if you let them. Like this one, for example:

If you’re looking for a top score on SAT math, you should be able to solve this with algebra, and you should also be able to solve it by plugging in. Being nimble in this way is how you work around the fact that you’re likely to see at least one problem on test day that thwarts your first attempt to solve it. Being comfortable solving a question like this two ways is also the best way to avoid careless errors—check your work by solving the way that you didn’t solve it the first time. If you get the same answer both ways, you’re almost certainly right. Both solutions below.

Let’s start with plug in

So (A) is clearly the answer.

Now let’s do the algebra

Now just do some subtraction to find out how many fewer pairs of socks would have been purchased: 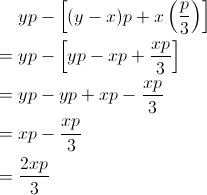 Unsurprisingly, we arrive at the same answer either way. Again, if you’re shooting for an 800, you really should be able to breeze through this question (and ones like it) both ways.

wait, i solved this question in almost a minute and a half (i think that’s reasonable) it’s really easy but i used plugging in. Is it necessary for knowing BOTH ways if your shooting for an 800? i think using algebra on this one would have taken me way more time just so i could wrap my head around a question like this..

You’re doing quite well, so I think you’ve already figured out the balance of algebra and plugging in that works for you. This would probably be the toughest question you’d come across in a section, so if you got it right, with certainty, in 90 seconds, I’d say you’re in fine shape.