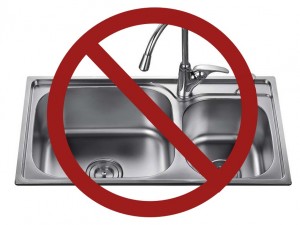 As I’m wont to do once in a while, I’m going to expand on an idea here that might otherwise disappear forever into the murky depths of Tumblrdom. This post is inspired by (and borrows heavily from) this Q&A response. I’m revisiting it here because I think it’s a nice contrast between me and many other tutors and prep book authors. Pro-tip: When you see an opportunity to set yourself apart, take it.

The original question I received went something like this:

Have you ever heard the phrase “everything but the kitchen sink”? As in, “He put everything but the kitchen sink into his suitcase when he packed for his vacation”? The “cheat sheet” this person refers to is represents what I call kitchen sink SAT prep (Bad Idea #4 from this post). It’s characterized by a bunch of extraneous information that, while true, is probably not useful for the SAT, and is therefore only a distraction from the things you actually need to know.

The formula above is true—I’ll derive it below—but it’s also very unlikely to be useful on test day.

Here’s what I think you should memorize about average speed questions:

That’s a simple formula to remember, and the things that need to be plugged into it are simple to find.

Let’s test it with an example.

Here’s the thing: not only is that general formula easier to memorize than the more complicated special case one from the “cheat sheet,” but it’s also more versatile! Using my preferred average speed formula works whether the two distances are the same or not. Using the “shortcut” formula above only works when the two distances are the same. Oh, and one more thing: the simple formula is how the more complicated and less useful “shortcut” is derived! That nerdery below the cut.

Let’s use the general average speed formula above (and the example we used to illustrate it) to derive the “shortcut.”

In our example about Kevin, we found the total distance traveled by simply adding up the distances he traveled. In the case where two distances traveled are the same (call them both d), then the general “total distance” numerator is going to be:

We found the two different times above (3 hours and 0.5 hours) by dividing the distances by the rates (which we’ll call r1 and r2). So the “total time” denominator is going to be:

Put it all together:

Which, with a little algebra, simplifies to the “shortcut.” First, fix that ugly mixed fraction. When you divide by a fraction, that’s the same as multiplying by its inverse. So you can rewrite:

From there, you just need to cancel out the d, and you’re there:

Make sure the “shortcut” gives us the same answer we already know is right:

So…yeah. It works. But this “shortcut” only works on a special case question that’s rarely asked, and it’s much harder to memorize than the general form. If the distances aren’t the same, the shortcut is useless. The general formula still works. Kitchen sink math or PWN math? THE CHOICE IS YOURS.

Since I’m all fired up now, here’s one more example of kitchen sink math vs. my kind of math. The volume of a right prism—one of the few types of 3-D figures you might see on the SAT—is the area of its base times its height. That’s the general rule. Now, one could create a “cheat sheet” with complicated formulas for each kind of prism in that class of solids—I’ve shown a few below.

Right prism with rectangular base (base sides l and w, height h):

But here’s the thing: if you set about memorizing those, you’re jamming a bunch of redundant formulas into your head. If you’re comfortable with triangles, and you know the general volume rule for a right prism, then you don’t need to memorize the formula for the volume of a right prism with equilateral triangle bases—you basically already know it. All you need to remember about right prism volumes is this:

The issue with the kitchen sink approach, if I’ve not beaten this completely to death yet, is this: if you memorize a bunch of special case formulas, but you don’t have a sense of where they come from, then you’re going to be in trouble on test day if you get thrown a curve ball. Kitchen sink prep means you’re over-preparing by memorizing something that’s very unlikely to be useful—both of my examples, prism volume questions and average speed questions are very rare—AND you’re still not prepared for the full breadth of prism volume or average speed questions you might see. Seems silly to me when you could memorize a simpler fact and apply it more broadly.

Right on, Mike. SAT math is all about using a limited number of basic facts/formulas in novel ways. Get into the habit of riffing on the basics and you’ll be all set.