You know, It’s funny. When I sit down to write one of these, I usually have a rough sketch in my mind of how the question’s going to go. But half the time, the problem completely evolves into something else by the time I’m done with it. I’m not sure why that is. It could just be that I’m capricious, but it’s probably because math comes into much sharper focus once it’s written down. Which I only mention to gently encourage you to write everything down when you take tests.

Anyway, you know the drill by now. First correct response in the comments wins a copy of my Math Guide. Full contest rules here.

Note: If you’re new to the site, your comment might not appear right away. Don’t panic—I receive comments in my email in the order they’re submitted. If you’re the first to get it right, you’ll win even if your comment doesn’t immediately appear. 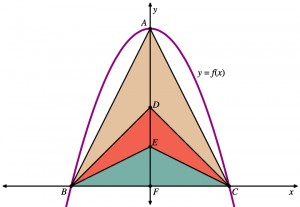 We know that D and E are midpoints, so we now know a few distances. Let’s throw them on the figure: 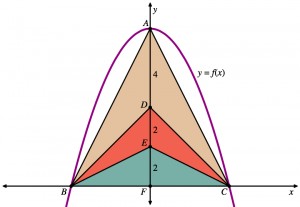 The only other thing we have to work with is that BDCE has an area of 8. There are a few ways one might use that information—and please, as always, leave your own solutions in the comments—but I recommend recognizing that, because parabolas are symmetrical, everything on this figure is symmetrical about the y-axis. So if BDCE has an area of 8, then △DEB and △DEC each have areas of 4. We can work more easily with triangles.
Let’s focus on △DEC. 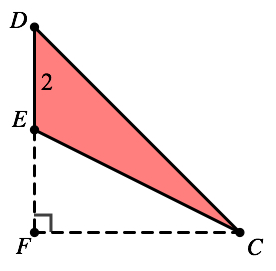 If △DEC has an area of 8, and a base of DE = 2, we can solve its height, FC.* We do this with the handy-dandy triangle area formula: 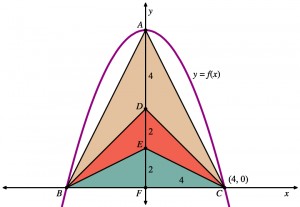 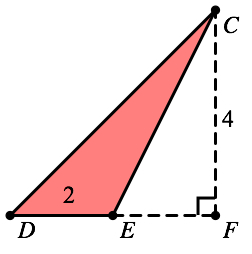 * If you’re unhappy about me calling DE the base and FC the height, have a look at the same triangle rotated 90º. Better? Cool.

I get -1/8 but I am out of practice. Kudos for keeping this blog going strong. It’s as good today as the day I found it almost two years ago. One of if not the best free resource on the net for SAT test prep. Hope things are going well with book sales and all else…

Thanks JD–great to hear from you. Things are good here…hope the same is true for you!

Well, as long as we are correcting ourselves I will change to -1/2 as well..