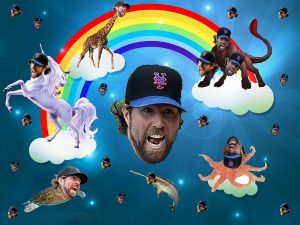 I found this awesome graphic at Amazin’ Avenue, and it inspired me to write a baseball-themed challenge question this week. I’m a huge Mets fan, and my favorite player on the team right now is R.A. Dickey. He faces the hated Phillies tonight. I am so pumped to watch.

In the 2011 season, R.A. Dickey has thrown 1758 pitches and batters have completed 494 plate appearances against him as of July 15. What is the least number of batters he would need to face to have a pitch per plate appearance average under 3.50?

Put your answers in the comments. I’ll post the solution Monday.

UPDATE: solution below the cut.

Don’t get hung up on the terminology! Even for baseball fans, this isn’t a stat that comes up in conversation. The SAT won’t ask about something so culturally anchored as baseball, but it very well might throw a question like this at you in another context.

If we’re looking for the minimum number of batters he must face to get that average under 3.5, we need to figure out the minimum number of pitches that can occur in a plate appearance. That number is 1. A batter can see one pitch and, say, get a hit. He could also ground out on that pitch. Pitch per plate appearance, as you see, doesn’t tell much of a story on its own.

So the minimum number of batters he must face must be the SAME as the number of additional pitches he must throw, since it’s one pitch per batter.

From here, you can either throw the equation into your trusty graphing calculator and use the table to scroll down until you see the average drop under 3.5, or you can solve algebraically. Either way, you should see that after 11 additional plate appearances and pitches, his average is just over 3.5, and after 12, it’s just under.

So the answer I’m looking for here is 12.

True, but you can’t have additional plate appearances without additional pitches thrown, so both numerator and denominator have to change. See the solution (just posted).

I have to admit that that wasn’t really my answer anyway 😉  I sent the question to a baseball fan and that was his answer.  I’ll make sure he’s got the right one!