The College Board released a big document today that fills in some of the blanks about the new SAT, which will make its debut in March 2016. I woke up early to dig though it like a little kid on Christmas morning.

Rather than trying to jam all my reactions into a single monolithic post, I’m going to be making frequent, short updates as I read more, and my reactions evolve. In this post, I’m reading and giving my initial reactions to the part of the document that pertains to the math section. The math content begins on page 133 of the document if you want to follow along.

As we’ve known since March, the new SAT will test students on three somewhat vaguely defined areas: Heart of Algebra, Problem Solving and Data Analysis, and Passport to Advanced Math. We now know that in addition to the main Math scores on the 800 scale, students will receive subscores in each of those topics. College Board also reveals that the test will contain questions on Additional Topics in Math that won’t contribute to the subscores of the three main sections, but will contribute to the overall math score. This, apparently, is where geometry will live.

All told, the new SAT’s math section will consist of 80 minutes of testing on 57 questions—10 more minutes and 3 more questions than the current SAT.

This is all about linear equations. While it’s clear that there’ll be more linear equations on the new SAT than there were on the old one, there doesn’t appear to be anything new. Students will need to solve linear equations and systems of equations, and recognize properties of graphs (e.g. slope, x– and y-intercepts). Here’s a screenshot of an example question (p147):

This is a straight-up solving for expressions question. Students who’ve been prepping assiduously for the current SAT should have no problem recognizing the one-step solution: multiply the whole equation by 6:

Solving for expressions will also come into play in questions like this grid-on (p162):

Any value in that range works.

Unlike the current SAT, though, it looks like systems of equations on the new SAT will not always be solving for expressions questions. Check out this multiple choice question (p148): 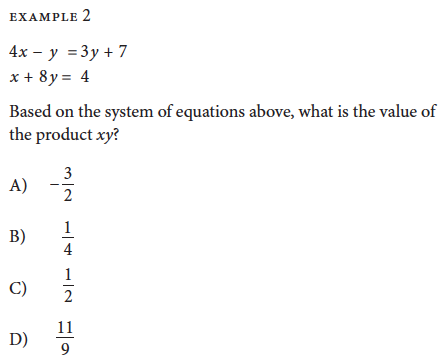 No simple way to get xy there—you actually have to solve for each variable individually. Also, four answer choices instead of five? WHAT IS HAPPENING!?

To solve, first get x by itself in the second equation:

Now substitute for x in the first equation and solve for y:

Finally, multiply to get the answer:

So…fun, right? No. Not fun. Soul-suckingly boring. But I’m not really complaining; the ability to solve linear equations is important, and in my experience a lot of students need to be reminded how to do it by the time they reach SAT-taking age. This is a good change.

Here’s one more Heart of Algebra question I love (p167): 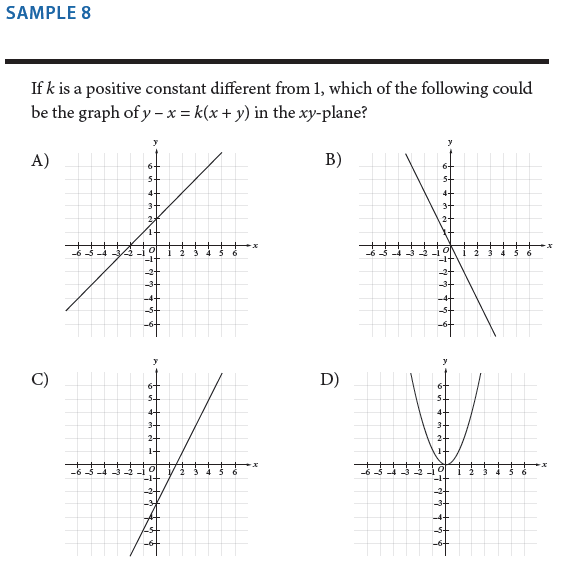 You can do a lot of algebra to shoehorn this into y=mx + b form, but nimble students should be able to look at the original equation and see two things: 1) there’s no

It seems like the Data Analysis part of this category won’t be much different than current SAT questions that require students to read tables and graphs. Again, while this skill is tested on the current SAT, it looks to be a much more prominent feature in the new one. Students probably won’t have to calculate best-fit lines, but they’ll need to know what a best-fit line is, and why it’s important. Check this out (p172): 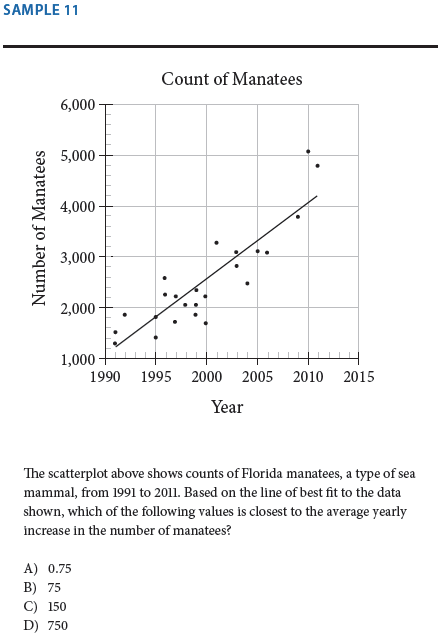 The real interesting thing in Problem Solving and Data Analysis, though, is the Extended Thinking question. Students taking the new SAT will have to wrestle with stuff like this (p180): 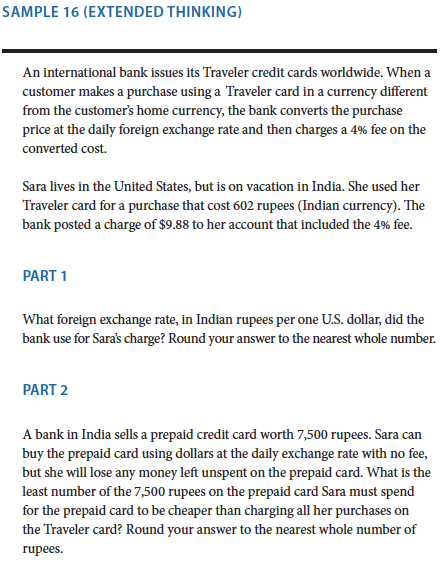 Yikes, right? Questions like this will be worth 4 points, and should serve to silence everyone who says the new SAT will be too easy compared to the old one.

If the bank converts Sara’s purchase to dollars, and adds a 4% charge, then the $9.88 she’s charged doesn’t convert directly to rupees. First we need to get that 4% fee out of there. If x = the dollar cost of her purchase without the fee, then 1.04x = 9.88.

So her purchase was worth $9.50, which means the exchange rate that day, in rupees per dollar, is:

Round that to the nearest whole number and the answer to part 1 is 63.

If Sara buys the prepaid card, she doesn’t have to pay the 4% fee her credit card charges her, but she could lose money if she doesn’t spend the whole card. The exchange rate doesn’t actually matter anymore—we can actually forget about dollars entirely at this point.

The question is really how much Sara has to spend on her credit card, with the 4% fee, before she’d save money by buying the prepaid card, even if she doesn’t spend it all. Say y = the amount of rupees Sara spends:

Passport to Advanced Math is going to involve a lot of manipulating unwieldy equations, and recognizing what parts of those equations mean. The SAT has tested this kind of thing in the past, to the chagrin of many test takers. (An example that comes to mind is the January 2008 test, which is included on the DVD if you got the Blue Book edition that comes with a DVD. See section 8, question #14, with the stacked pails.) 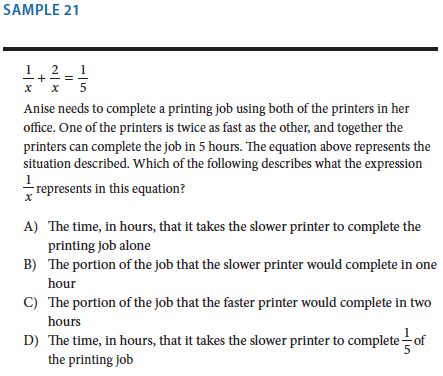 Once you’ve got that figured out, then the rest is easy—the answer must be B).

Passport to Advanced Math will also contain more straightforward questions that will be familiar to any student that’s taken algebra 2 (p188): 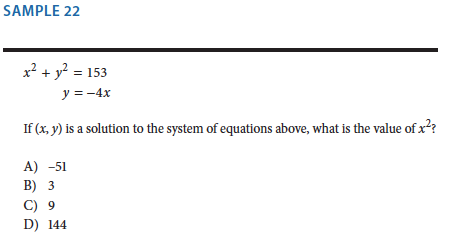 To get this one, just substitute (and pay careful attention—the SAT will still try to nail you by asking for

but making x (or at least one value of it) a choice.

Here’s where all the surprises are. The following concepts will now be tested on the SAT:

The whole of geometry from the current SAT seems to live under this category, too. As noted above, this stuff doesn’t contribute to any of your math subscores (it remains to be seen how subscores will be used, but I’m guessing they’ll have limited value except for diagnostic purposes as students prepare), but will contribute to your overall math score. 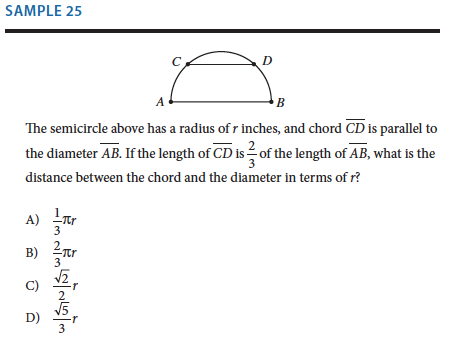 With the exception of the word “chord,” this question would be just as at home on the current SAT—it’s a question that doesn’t immediately look like a right triangle question, but it’s totally a right triangle question. Another nice thing about this question is that it’s proof that plugging in will still be useful on the new SAT. Say r = 3, so that AB = 6 and CD = 4. Now draw some lines: Of course, since PD is a radius, it has a length of 3 just like AP and PB.

Only one answer choice has

in it, so we can feel pretty good about (D) without even doing the last step of the plugging in process, which is to put 3 in for r in each answer choice. Of course, when you do, (D) is the only answer to give you A calculator would be nice here—plug in, graph, and you’re done. Without a calculator, you need to know the relationship between angles with opposite sines. Since the sine function has a period of 2π, subtracting π from x will result in a negated sine. :/

Above are just a few quick impressions. I’ll be posting more in the coming days as I’ve had more time to dig into the details. And of course, remember that if you’re prepping for the SAT now, you don’t need to worry about this stuff at all. The SAT doesn’t change until March 2016.

For sample 8, you can also just plug-in. If k=2, then you end up with the equation y=-3x. The only graph with a negative slope and a y-intercept of zero is B.

Hah! Digging through the 200-page document like a kid on Christmas? Love it! I’m actually looking forward to the new SAT, at least for math. I like how it deals with more mathematical fluency, without adding too many new concepts. Thanks for breaking down the new math sections. Not a fan of the impending verbal changes though – too much like the ACT now.

Hey, Mike. For Sample 21, it looks like 1/x and 2/x are obviously the old printer and the twice-as-fast new printer, respectively, and, since the whole job will take 5 hours, the 1/5 figure is the amount of (combined) work that can be performed in 1 hour. This translates to the 1/x figure representing the amount of work that the old printer can perform in one hour. Looking at it this way allows you to skip the 1/5 and 2/15 calculations completely & go directly to the correct Answer Choice.