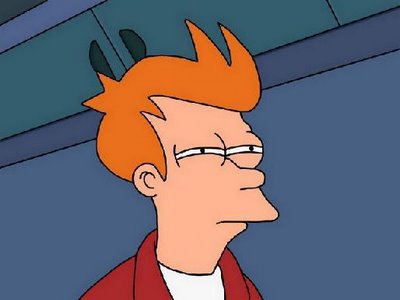 As you know, I’ve been poking around in the 200-page document recently released by the College Board about the new SAT (coming March 2016). When the new exam was announced a month ago, one of the sound bites that got traction in the press was that the SAT would be returning to the old, familiar 1600 point scale. That struck me as odd: the 1600 scale was certainly more familiar to reporters writing stories about the SAT, who probably took the test before 2005, but anyone who works with the test, and certainly anyone prepping for it, acclimated to 2400 a long time ago. Anyway, it turns out that the return to 1600 will be a lot more complicated than College Board originally let on.

As it stands now, students who take the new SAT will receive not only scores of 200–800 for Math and Evidence-Based Reading and Writing (the sum of which will comprise the 1600 score) and an essay score, but also a whole bunch of other scores. I’ll try to make sense of it all for you below.

The scores students and parents will care about

Students will receive two area (domain) scores: one for Math, and one for Evidence-Based Reading and Writing (EBRW). Each of these will be on a 200–800 scale. They will combine to form the composite score on a 400–1600 scale. The essay will not factor into theses scores.

Students will also receive three test scores, which will be on a 10–40 scale. These will be the Reading Test score, the Writing and Language (WL) Test score, and the Math Test score. The essay will still not factor into these scores. The Essay Test, which will be the fourth (and optional*) test, will get its own score. More on that later.

* My guess is that enough selective colleges will ask students to submit essay scores that the essay won’t be optional for ambitious students.

The scores no one will care about

There are nine of these. That’s right—nine scores you’re probably not going to care about.

Students will receive seven subscores, on a 1–15 scale. These might actually provide some value to students hoping to raise their area scores, but which will probably not matter much (or at all) in the admissions process. Below is a list of the planned subscores:

The letters in parentheses next to those subscores are the tests in which the content comprising the subscores will be. So the first two subscores, Command of Evidence and Relevant Words in Context, will be the result of student performance on items in both the Reading and the Writing and Language Tests.

Not every item on the SAT will contribute to a subscore. For example, as I point out in my post about the new SAT’s math section, questions categorized “Additional Topics in Math,” including geometry, trigonometry, complex numbers, etc. will contribute to overall math test and area scores, but not subscores. Simple, right? Who could be confused by this?

Rounding out the scores nobody will care about are the cross-test scores, which will be on a 10–40 scale, just like the test scores. Students will receive two of these: Analysis in History/Social Studies and Analysis in Science. Cross-test scores will be determined based on student performance throughout the entire SAT. So, for example, a math question requiring students to do statistical analysis on demographic information will contribute to the Analysis in History/Social Studies cross-test score, as will student performance on reading and writing tasks pertaining to social studies.

The College Board is pretty noncommittal about this so far, stating that this decision will be reassessed pending further research, but the current plan is that two readers will rate student essays on a scale of 1–4 for each of three traits. Those ratings will be added together to give students a 2–8 rating for Reading, Analysis, and Writing. That’s right: 2/3 of a student’s essay scores will be determined based on how well he/she communicates an understanding of the content and structure of the prompt passage. This makes more sense than it initially seems, given the nature of the new SAT’s essay assignment. (I’ll post about the new essay soon enough, but in the meantime you can check out a sample prompt on page 122 of the College Board document linked at the top of this post.)

I’m betting whether College Board likes it or not, they’re going to have to provide some sort of single-number essay score or people are going to go nuts. My guess is that’ll be either an average of those three scores, or a sum.

Below is the College Board’s own summary of this scoring scheme, from page 23 of the document linked at the top of this post. The College Board is careful throughout the document to point out that these are only preliminary blueprints and that things might change before March 2016; these caveats certainly apply to the scoring scheme as well. I suspect that we’ll see some evolution of this system. 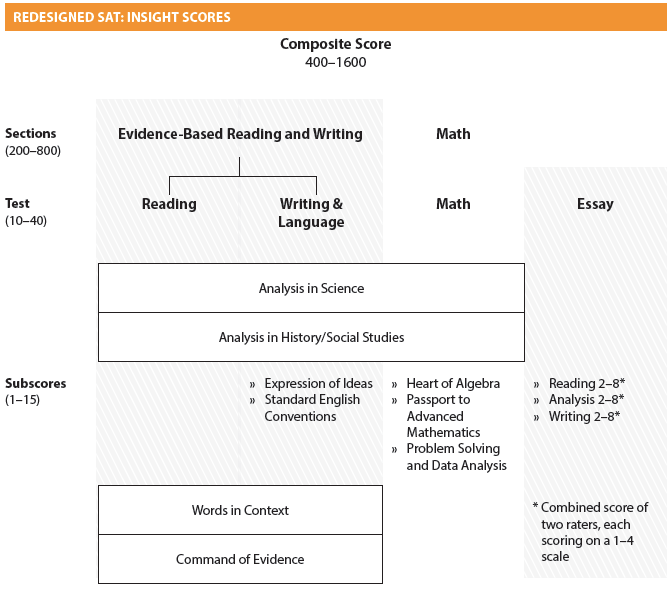 Before I wrap this up, I want to say a few more things.

First, I’m no education expert. I’m a good teacher, but my Master’s degree is in environmental policy, not education. I’m in this business because I like helping kids; I happily leave the architecting to the architects. That said, there’s a lot here not to like from the perspective of someone who likes helping kids. I’m dreading the first time someone calls me looking for tutoring because their Passport to Advanced Math subscore is keeping their area score down. I don’t know how vague euphemisms help anyone whose mission is “delivering opportunity” (an impressive euphemism in its own right) to disadvantaged students.

Second, I want to quote this bit of text from the College Board’s discussion of test scores (the 10–40 scores for Reading, Writing and Language, and Math). This probably also applies to cross-test scores, which are on the same 10–40 scale. From page 22:

The SAT will be the anchor of a vertically aligned, longitudinal assessment system that is designed to monitor student growth across grades in each of these areas annually.

As others have pointed out before me, this is about the Common Core. David Coleman, the President of the College Board who presided over the construction of this new test, was on the team that designed the Common Core. As I’ve said, I’m no education expert and I don’t feel comfortable getting into a debate on the merits of the Common Core here or anywhere else. I do think, however, that the Common Core, and how the new exam complements it, should feature more prominently in the mainstream press’s coverage of the SAT overhaul.

Thanks for the sum-up Mike. You’re almost certain to be correct about the only scores people will care about. Psychometricians love adding “value” by creating more scales, but my experience in the world of psych testing tells me that most will ignore the new scales because no one can ever figure out how they’re useful in the real world. Making use of that level of detail requires making yourself a serious expert, and who has time for that? Especially when using the broader scores is working just fine for your purposes… Colleges STILL don’t really use the writing score, so there’s no way they’re going to magically care about “Standard English Conventions.” I agree, though, they might be useful to those of us in the biz.