I have a lot to say about  the new SAT’s essay; I might not end up being able to squeeze it all into one post, but I’m going to try. In order to give this post a bit of structure—both to help me organize my thoughts and to help you find what you’re looking for—I’m going to break this post into three sections: what we know (including the basic structure of the task), what we don’t, and what I think. If you’re interested in this stuff and you haven’t already, you might want to download the College Board’s Test Specifications for the Redesigned SAT. I’ll be referring to page numbers from that document once in a while.

The new SAT’s essay will look very different from the current SAT’s essay. Here’s what the new prompt will be for every test administration (from page 76): 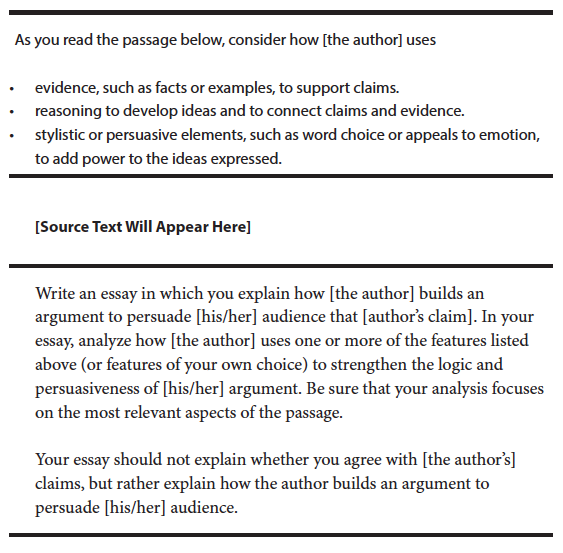 This is a major departure. Although the prompts on the current test do contain some of the same instructional text every time (“Plan and write an essay in which you develop your point of view on this issue. Support your position with reasoning and examples taken from your reading, studies, experience, or observations.”) the task varies significantly from test to test.

The actual passage students will write on a 650-750 word passage that will be generally characterizable as an “argument written for a broad audience.” In the Test Specifications document, two example passages are given—one concerning a decline in reading among America’s young people (page 77), and one concerning light pollution (page 122). Both strike me as passages that could very easily appear on the current SAT in a Critical Reading section.

The most interesting thing here, to me, is that the author’s main claim is given to students in the question, and students are specifically instructed to set their own opinions aside.

The other big headlines about the new SAT’s essay are that it will be optional, and that students will get 50 minutes to complete the task. I’m sure I’m not the first person to have told you either of those things.

What we don’t know

So, we know a fair amount of things! But we don’t know everything. As I was reading through the Test Specifications for the Essay, I jotted down some as-yet-unanswered questions.

It’s not clear yet how the new essay will be scored. The College Board candidly admits that it’s still trying to figure out how to evaluate the thing. As it stands right now, each essay will be evaluated by two readers who will each rate the essays on a 1–4 scale for each of three broad essay traits: Reading, Analysis, and Writing (see screencap above from page 82). There’s no rubric yet, and honestly I don’t feel like it’d be productive for me to speculate much about how this will evolve. I’m in wait-and-see mode on this one. (For my take on the general scoring scheme of the new SAT, which might be summed up as o_O, click here.)

The College Board has been very specific about how long students will have to write the essay, and even a the word count of the passage prompt, but has not specified whether students will be limited in the amount of writing they can produce. The current SAT essay allows students two hand-written pages for 25 minutes. Will the new one double that?

It’s also worth pointing out here that although David Coleman announced that students would be able to take the new SAT on a computer in 2016 in his big announcement back in March, there’s not a single mention of that anywhere in the 211 pages of Test Specifications released last week. I know a lot of students who are pretty fast typists. How will the ability to type impact essay length restrictions? Will there even be length restrictions for computer testers?

Maybe more importantly, how can handwritten essays be evaluated on the same criteria as typed essays? When you think about who will be more likely to take the test on a computer—students at schools that can afford to provide computers for every student taking the test— it’s easy to see how this might work counter to the College Board’s goal of “delivering opportunity.” The College Board has quite notably not released an example of what would be considered a strong essay. It does provide annotations of the two sample prompt passages (example on right, from page 81), but those read much more like the notes of someone about to write a set of Critical Reading questions about the passage than they do like an outline.

The prompt specifically instructs students not to write about whether they agree or disagree with the prompt, but the scoring guidelines as they stand do require students to “provide a precise central claim.” For now, I’m assuming that means that good essays will begin with sentences like, “Dana Gioia combines emotional appeals with concrete and authoritative data to argue that the decline of reading in America will have a negative effect on society.”

When we finally see some exemplary essays (Ideally in two sets—one of good handwritten essays and one of good typed essays) we’ll know a lot more.

Huge question mark here. At least at first, there will probably be a lot of colleges who don’t care, which will mean many students will be able to take a 3-hour multiple choice test, and then go home without slogging through the 50-minute essay. This might compel students to a bit more proactive in compiling their college list before they do much testing.

Competitive students who don’t know which schools they’re going to apply to will probably have to take the SAT essay just in case they choose to apply to schools that require it later. I’m betting that at least a few of the most competitive schools will be on board right away. The Dean of Admissions at Harvard seems to like the new SAT, for example, so students with Harvard aspirations should probably plan to take the essay.

The College Board set out to address the weaknesses of the current SAT essay, and has successfully neutralized a couple of them. First, students will no longer be able to fabricate examples about their uncle George to support their argument—truth will matter in the new SAT’s essay. I’m super psyched about that. One of the only truly tiresome parts of the otherwise super-fun job of being an SAT tutor is when a student says “my friend says he just made all his examples up and he got a 12 so why aren’t you telling me to do that?” I’ll be very glad to stop having that conversation.

Second, a major, and valid, complaint about the current SAT’s essay is that it doesn’t really tell colleges anything worth knowing about a student. There is certainly some skill involved in writing a coherent essay on a prompt you’ve just been given that you might not have ever thought about before, but that skill isn’t really required for serious college work—written assignments in college will afford students plenty of time to research and form well-reasoned positions. In forcing students to leave their opinions at the door and analyze how an author makes his or her argument, the new SAT’s essay task serves as a better proxy for college preparedness. I do, however, pity whoever gets hired to read these things. They’re going to be super boring.

I obviously think the whole new SAT will be susceptible to prep just like any other standardized test, but I think the new SAT’s essay might be the most “preppable” thing on there. Further, I’m pretty sure that’s intentional. Look at this quote from page 76:

What do you make of that?

As for what prep’s going to look like, here’s my best guess: students will go through the prompt and annotate it with a few shorthand codes: “AS” for evidence from authoritative source, “F” for well-known fact, “E” for emotional appeal, “W” for stylistic word choice, etc. That’ll give them a picture of which common devices the author uses to make his point. Then students will write a quick intro (“Dana Gioia combines emotional appeals with concrete and authoritative data to argue that the decline of reading in America will have a negative effect on society.”), and devote a paragraph to each important device and how it furthered the author’s argument.

It’s going to be a boring 50 minutes, writing this essay. But students who learn to do it will will very possibly also learn to better, more careful readers.

Evaluating the author’s arguments is already in use as an assessment on the GRE. I wonder if that’s the inspiration…

Oh o_o this is a lot like the AP English Analysis essay. I’m so glad I’m not taking the SAT in 2016. Thank you for sharing!